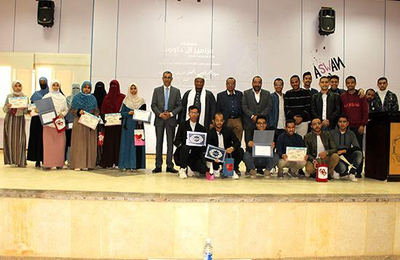 In frame of the university’s plan, headed by Prof. Ayman Mahmoud Othman_Aswan University President _ to implement student, sports, cultural, scientific and social activities for the academic year 2020/2021 in the various faculties of the university. under the leadership of Dr. Mohamed Zaki Al-Dahshoury – Dean of Faculty of Medicine, and in the attendance of Dr. Mostafa Adam Al-Tiri – Vice Dean for Education and Student Affairs, Faculty of Medicine organized a honoring ceremony for students of Faculty of Medicine who memorized the Holy Qur’an in the “Mazameer Dawood” competition for memorization and recitation, which is held for the third year in a row. .

Whereas the competition was held, under the supervision of His Eminence Sheikh / Ramadan Abo Tarboush – Sheikh of the reciters of the Upper Egypt region, and organized by Dr / Hussein Mohamed Hussein – lecturer of medical physiology, in cooperation with Iman Abdel-Salam_ youth welfare officer at the faculty, and the students of the union, headed by Mahmoud Al-Sayed, head of the Students’ Union of the faculty this year.

In the midst of an elite gathering of Al-Azhar sheikhs and students of the Faculty of Medicine from the various academic batches in the faculty, the ceremony began with the recitation of verses from the Holy Qur’an, which recited by the owner of the golden flute, who won first place last year, student /Osama Rekabi in the sixth year, and then the concert paragraphs continued, where he performed with Abdallah Abu Ellail

Dr. Mohammad Zaki Al-Dahshoury, Dean of the faculty of Medicine, urged the students to encourage them to continue training, fortification and adherence to Holly Quran wishing them more excellence and success on the scientific, personal and professional levels, as they are heroes of the White Army in the near future and who are devoted to serving patients. and working on treating them.

His Eminence Sheikh / Ramadan Abo Tarboush pointed to the importance of memorizing the Holly Quran, persevering in reciting it, acting on its commands and avoiding its prohibitions, as it is the savior in this world and the hereafter, with thanks to the organizers of the competition’s activities.

Which resulted with winning the following students:

At the end of the ceremony, the faculty administration honored the winners, and presented the faculty shield to Sheikh Ramadan Abo Tarboush in appreciation for his efforts.

Dear students, with the beginning of the new academic year 2017/2018, we are going to receive the new building of Aswan new city and this year is different from the ......... Read More