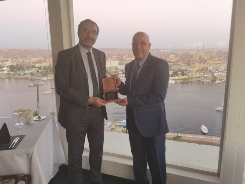 Prof. Ayman Othman confirmed that the visit of the delegation of the Spanish Jaen University comes to discuss ways of cooperation and working on extending the cooperation agreement concluded between the two universities for 5 years, in a number of various scientific and research fields.

Dr. Hazem El-Gamal_ Faculty of Al-Alsun Dean and the International Cooperation Officer at Aswan University, said that the Spanish Cultural Counsellor. Candido Cris, discussed all means of support for the Spanish Language Department_ Faculty of Al-Alsun, Aswan University, and that the Spanish Embassy provides all support to the students of the department in order to improve the educational system, especially learning Spanish as a foreign language. A Spanish cultural day will also be held at the faculty headquarter in the university campus in Aswan new city, and in attendance of the Spanish ambassador and the cultural counselor to support the students and working on motivate them to learn the Spanish language and know its arts.

At the end of the meeting, Dr. Juan Gomez_ President of the Spanish Jaen University _ presented the university’s shield to Prof. Ayman Mahmoud Othman_ Acting President of Aswan University, in appreciation of the importance of fruitful and constructive cooperation between the two sides.

Dear students, with the beginning of the new academic year 2017/2018, we are going to receive the new building of Aswan new city and this year is different from the ......... Read More